Are you interested in the haunted going in your town?  Digs we’re incredibly proud to host student accommodation in Huddersfield, Sheffield, and Wolverhampton. These are some of the oldest cities in the UK, and sometimes that means ghosts. Yes, throughout England, there are thousands of hauntings, including in these student cities.
So, whether you’re a true believer or a sceptic looking to learn more, settle in and learn about these infamous hauntings…

Woodsome Hall in Almondsbury might be a great place to play a round of golf now but long before it was home to a Huddersfield haunting. This astounding piece of Huddersfield history actually has root’s dating back to the 13th century. But it’s haunting has to do with the untimely death of 17th-century steward James Remington.
According to local folklore historian, Kai Roberts author of Haunted in Huddersfield, his ghost appears around this great hall and the grounds. In fact, the hauntings were so prominent that they even tried to bring in a clergyman in the lay his spirit to rest. Did it work? Well visit and see for yourself…

Huddersfield’s historic St Georges Square Station is said to be haunted by the ghost of a porter who died there over 200 hundred years ago. Witnesses have seen this figure around the platforms at night. There’s even evidence of white orbs caught on camera. Are these signs of ghostly activity?

Did you know Sheffield is the most geographically diverse city in England? Maybe there’s something in its landscape that makes Sheffield so haunted? Check out these alleged Sheffield hauntings you’ll notice one is right near the Digs student accommodation! Sheffield is truly full of such interesting spots.

The Sheffield Manor Lodge is a luxury country estate, built in the 16th century for the 4th Earl of Shrewsbury in an expansive deer park.
When Mary Queen of Scots was held prisoner by her sister Queen Elizabeth in the late 15th century, she was kept there in The Turret House where many people have claimed to see her. Sheffield Manor Lodge now sits in ruins of its former glory. You’re able to take a day trip here and see if you can spot Queen Mary yourself.

Carbrook Hall in Attercliffe is one of the oldest buildings in the area and recently updated to Grade two listed status due to its historical structure. But there’s more to this building than meets the eye. Patrons of this former public house alleging to hear mysterious noises deep into the night, sounds like children, laughter without a source or the banging of doors when no one is around. However, Carbrook Hall recently converted into a Starbucks, so if you like a side of fright with your Frappuccino check this one out.

The National Emergency Museum in Sheffield is apparently filled with supernatural activity. It was even on an episode of Most Haunted! Perhaps it’s something to do with all the history in the exhibits, or maybe there’s something in the grounds of South Yorkshire that makes this one of the most haunted museums in England. They also offer regular ghost nights and ghost walks if you want to venture out at night.

This small stretch of road in Sheffield is said to be ‘The Most Haunted Roads’ in the UK. Witnesses have said to see a long-robed figure said to resemble a monk and children playing who disappear once you approach them. Stocksbridge Pass is now part of the A616. Many drivers have expressed driving this way at night either makes them nervous or anxious.

There are loads of things to do in Wolverhampton, maybe that’s why ghosts stick around! And it’s why so many of our students love the accommodation. So, grab your flatmates and head out for a ghost tour all over town.

The Grand Theatre on Lichfield Street has been around for over a century, so it makes sense that it’s the home to a couple of ghosts. Colloquially known as ‘The Grand’ it’s said that you can spot Mr Percy Purdy, allegedly a former manager of The Grand Theatre dressed up in his best suit, doing the rounds. There have also been some instances of doors becoming unlocked and furniture moving around, definitely something to check out the next time you’re there.

The Giffard Arms in Wolverhampton is a quirky rock pub with a unique aesthetic; it seems only natural that it’s also the home to a few ghosts. According to the Giffard Arms, paranormal researchers have confirmed sightings. Allegedly there’s evidence of a ghost of a woman and a young girl from the early 20th century along with some other colourful characters as well. 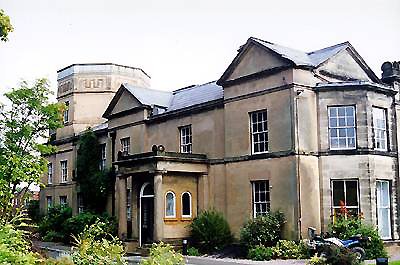 First built in the 18th century Tettenhall Towers is a famously haunted building, so much so that it has its own ghost tour. This historical building was run by Lieutenant Colonel Thomas Thorneycroft, a military man, and an inventor. He kept building on his house with ventilation and sewage systems until it got so big and so grand it became known as Tettenhall Towers. And who knows maybe he’s still there… Filled with secrets, you’ll have to take one of their famous ghost tours to find out more.

While Sheffield, Huddersfield and Wolverhampton are all very different places, what unites them is their long fascinating histories filled with exciting people. Perhaps it’ll take more than a few haunted places to convince you of the existence of ghosts. But even if you just pop in out of curiosity, you’re sure to find something to spark your interest.

Ideas to Keep You Busy in December 2020